Report commissioned by the Danish Minister for Foreign Affairs to investigate new defence policy arrangements within the EU, and the applicability of the defence opt-out.

In 2018, the Government of Denmark commissioned a number of academics to prepare a report on the developments in the EU in the field of security and defence policy cooperation, and its significance for Denmark. Graham Butler, Associate Professor of Law at Aarhus University was the sole lawyer on the research team.

The specific backdrop of the initiation of the investigation was due to the Member State’s defence opt-out as enshrined within European Union law, stemming from the ratification of the Treaty of Maastricht and the Edinburgh Decision of the early 1990s. The report, published in December 2019, was based on interviews with experts, officials and representatives from the EU institutions, bodies, and agencies; NATO; Danish public bodies; and officials from other Member States; as well as case files in the archive of the Ministry of Foreign Affairs of Denmark, in addition to official documents, and existing research.

The investigation reached a number of conclusions:

The report, commissioned by the Ministry of Foreign Affairs of Denmark, published under the auspices of the Danish Institute for International Studies (DIIS), is available for download here. 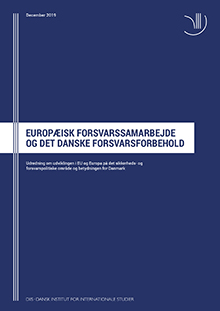